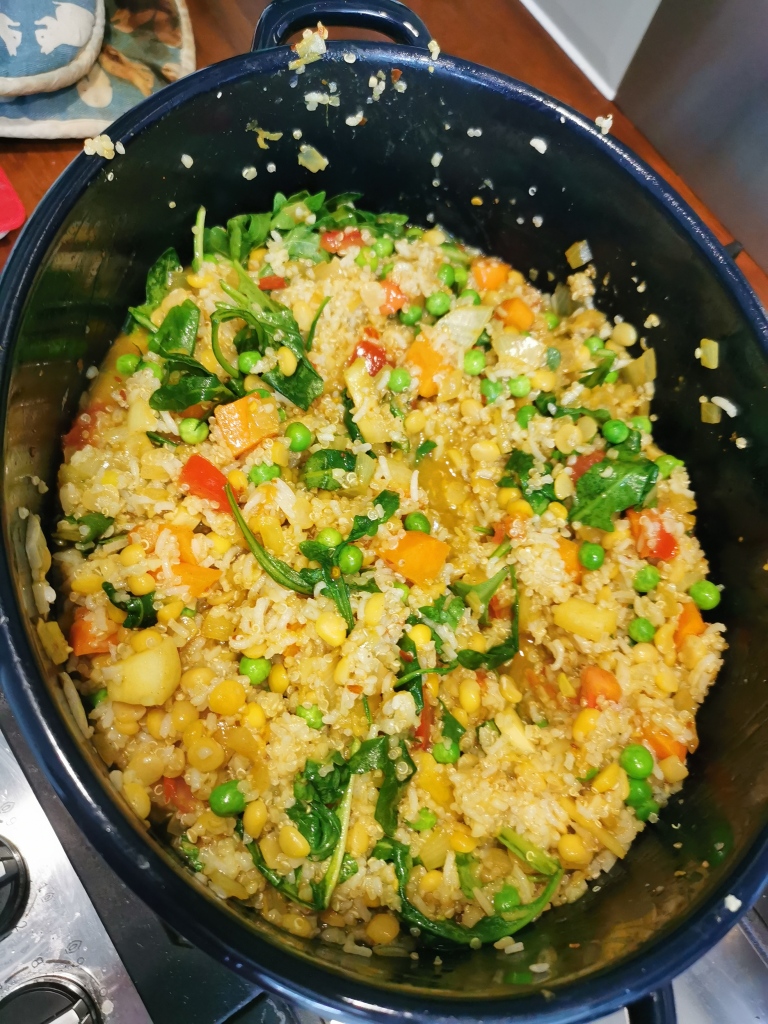 This recipe is another winner from the book ‘Simple Spice Vegetarian’. It’s actually a mix of rice, lentils and bulgur wheat which I kind of questioned when I first saw the recipe but the mixture of textures and the ability of the different elements to soak up the spices really added something to the flavour. The word kedgeree comes from this word too so you just know it’s going to be good. This is really tasty when you ramp up the ginger content.

1.) Cook the rice and lentils in a pan until tender, Halfway through cooking, add the bulgur wheat. Preheat the oven to 130 degrees C.

2.) In the meantime, peel and grate the ginger. Peel and finely dice the onion, carrot and parsnip.

3.) Make a masala paste by adding the turmeric, coriander and cumin in a bowl with a tbsp water and mixing.

4.) In a casserole dish, melt the ghee and add the onion. Cook for about 5 minutes, then add the chilli, ginger and garlic and cook for another couple of minutes.

5.) Add the masala paste and cook until it dries out. Chop up the tomatoes and add to the pan with the carrot and parsnip.

6.) Cook for about 5 minutes then add the spinach and peas and cook for another couple of minutes.

7.) Drain the lentils, rice and bulgur and add to the pan. Add the water and stir everything together. Cover with a lid and cook for 15 minutes.

Recently I started watching the Andy Warhol documentary on Netflix as I am a fan of art even though I know very little about it. During Warhol’s life he was a very private person and no one knew much about him but after his death his diaries were found, edited and published (they’re winging their way to me as we speak). What I really loved in the first episode is that the editor of his diaries said that some of the people he had written about resented what he’d said about them but she said this diary is Warhol’s narrative, if you want to tell your own narrative, write your own diary. Other people can disagree with you, but they can’t invalidate your opinions, your feelings are your own. So, in summary, don’t piss me off because I can totally write about you here, it’s my narrative :P. The documentary uses David Bowie’s ‘Andy Warhol’ song to open which is quite funny because for one, Andy Warhol didn’t like David Bowie. Also, David Bowie did idolise Warhol but despite that, you could hardly call his song flattering with lyrics such as ‘Andy Warhol, looks a scream, hang him on my wall. Andy Warhol, Silver Screen, can’t tell them apart at all’.

Here is another chickpea curry recipe that I found on BBC Good Food. It did have eggs but I didn’t so it’s eggless but feel free to add eggs or whatever kind of protein you like.

1.) Peel and finely chop the onion. Melt some ghee in a large pan and add the onion. Cook for 10 minutes until the onion is soft.

2.) Whilst this is cooking, put some rice in another pan with some boiling water and cook on a low heat. Peel and finely dice the garlic. Slice off the ginger skin and grate the ginger. Chop up the tomatoes.

3.) Add the garlic, ginger, spices, chilli flakes and tomatoes to the pan and fry for a couple of minutes.

4.) Drain the tin of chickpeas and add the chickpeas to the pan with 100ml water. Bring to a simmer, cover and cook for 25 minutes.

5.) Chop up the coriander leaves whilst this is cooking.

6.) Once this has finished, remove the lid and add the spinach, Cook for 3 more minutes until the leaves have wilted.

7.) Stir through the yoghurt and sprinkle over the coriander leaves. Serve with the rice.

I enjoyed The Tinder Swindler documentary so much I even listened to the podcast ‘The Making of the Tindler Swindler’ on Spotify. It’s fascinating stuff. On the back of that I just want more of the con artists and I’m trying to watch the show about Anna Delvey but to be honest, I’m pretty lost and I’m not sure what Julia Garner’s accent is meant to be and if it’s good or not, I’m not sure who she’s conning and how and what her motivation is. This is the weather for staying in watching TV and also for eating a hearty stew. This recipe from the Bosh team in ‘Healthy Vegan’ is great, It packs a lot of flavour for a veggie stew. This meal is both light and filling at the same time.

1.) Peel and finely dice the shallots and garlic. Peel the carrots and chop up. Chop up the celery.

2.) Heat the oil in a casserole dish and add the veggies. Cook for 5 minutes until soft.

3.) In the meantime, strip the leaves from the rosemary and the thyme. Chop them up finely.

4.) Chop up the potatoes into smaller chunks.

5.) Add the garlic to the pan and cook for another minute.

6.) Add the thyme and rosemary and cook for one more minute.

7.) Make up the stock and add to the pan with the water, bay leaf and mustard and bring to a simmer.

8.) Add the potatoes and cook until they’re tender.

9.) Chop the lemon in half and remove the pips. Drain the lentils and beans and add to the stew. Add the juice of half of the lemon. Simmer for 4 minutes.

10.) Whilst this is simmering, chop up the parsley and sage. Add the herbs, the kale and the marmite and simmer for another couple of minutes.

11.) Season with salt and pepper. Dish into bowls.

A tasty salad recipe from the Vegan duo behind the Bosh cookbooks and series. You may have noticed there’s no chickpeas in this recipe – the supermarket was completely out believe it or not! I assumed a tin of mixed beans would do the job and they did except for a bit of splitting while baked – didn’t change the taste though. This is a nice quick one to make and I even put the beans in the oven before the football started and finished off the salad at half time without missing any of the match.

1.) Preheat the oven to 180 degrees C and line a baking tray

2.) Drain the beans and pat them dry with kitchen roll

3,) Add the beans to a mixing bowl and add the tsp oil, paprika, cumin, coriander and a pinch of salt

4.) Stir to coat the beans in the spice and spread out on the baking tray. Bake for 25 minutes.

5.) Prep the rest of the salad. Chop up the cucumber (I got rid of the middle bit as it’s very watery), slice the tomatoes in half, chop up the avocado flesh and finely chop the mint,. Add these and the salad leaves back to the mixing bowl. Slice the lemon in half and squeeze in the juice. Add the tsp olive oil and stir.

7.) When the beans are ready, add to the salad mixture then pour over the dressing and gently toss.

To make the most of the veggie haggis you can buy around Burns’ Night, I bought another pack but did something a little different with it. In Britain, we like our pies and they’re usually savoury. A pasty is generally in the form of a folded circle containing the filling and the most famous pasty is the Cornish pasty. The Cornish pasty has a protected status in Europe so Cornish pasties must contain beef, swede, potato and onion. My version isn’t too different ingredients-wise though I didn’t manage to get the traditional 20 crimps to hold the pastry together.

For my pastry I used whole-wheat flour and learnt why you don’t often see people using it on the Bake-off. I did manage to cobble it together but I gave up on the presentation. The end result was light and flaky though and well-suited the spiced haggis is contained. I’ve seen recipes which put the swede and potato in raw but when I’ve tried that the filling hasn’t been quite as soft as I’d like and I find simmering in a bit of stock adds some flavour. The pasties freeze really well – stick them in the freezer at the point before the egg-wash.

Serves 8 (with a bit of filling left over)

1.) Boil a kettle full of water. Take the haggis out of the packet, wrap it in foil. Put in the pan, completely cover with the water and simmer for 40 minutes.

2.) Clean and chop the leeks. Fry in a frying pan.

4.) Peel and chop up the potato and swede. Add to the leeks when they’re soft. Cook down for 5 minutes.

5.) Make up the stock and add to the potato and swede and cook on a medium-low heat until the stock has cooked off.

6.) Remove the haggis from the water and unwrap. Cut off the plastic casing and add the haggis to the potato and mix.

7.) Whilst the haggis and potatoes are cooking, start to make the pastry.

8.) Add the flour to a food processor with 1/2 tsp salt. Cut the butter into small cubes and add to the flour.

9.) Blitz until it becomes breadcrumbs. I just pulse it pressing on and off the button to not overheat the mixture.

10.) Pour into a large bowl and add the water. Use your hands to shape into a ball but work the dough as little as as possible.

12.) After thirty minutes, lightly dust your surface and rolling pin with flour. Roll out the ball into a large rectangle. Mine was a bit dry due to the flour and crumbled a bit at the edges but I pushed them together.

14.) Turn the dough around and roll out back into a rectangle.

15.) Fold and roll out twice more then fold again, wrap up and put in the fridge for another half hour. (I put it on the fridge on a baking tray to make it easier). After about 15 minutes, preheat the oven to 180 degrees C.

16.) Once more, roll out the pastry and divide into 8 pieces.

17.) Spoon over about 4 tbsp filling (it should be room-temperature by now otherwise it will ruin the pastry)

18.) Fold the two sides over the filling and crimp them together.

19.) Separate the egg yolk into a bowl and mix with a tbsp milk. (I didn’t add the milk and the egg yolk is showing up on the whole-wheat pastry)

21.) Put the pasties on the tray and brush with the egg wash.

As I write this my football team who have been mediocre for some years now have somehow climbed the way up to sit at the top of the league. There is some worrying speculation that they may cancel the league soon because of COVID (as everything is) which could just drain the rest of my limited dry-January willpower. However, if they really must do it, I say they do it now whilst we’re in pole position!

Onion soup is a meal I really enjoy. It’s great with the cheese on toast as in Jamie Oliver’s ‘Veg’ but I enjoyed it with the cheese-dotted soda bread I made a few days ago. I didn’t really make many adjustments to his recipe and truly recommend the book.

1.) Peel and chop the onions

2.) Melt the butter in the pan, add the onions on a low heat

3.) Peel and chop up the garlic and add to the pan

4.) Strip off the thyme leaves – I find a good method is to start from the top of the branch and pull back. Add these to the pan. Generally a few sticks end up in the soup but they can be picked out.

5.) Add the flour and balsamic vinegar and cook down until the onions are golden. This is where the flavour comes from and is crucial.

6.) Pour in the cider and let it cook away for a few minutes.

7.) Add the miso and the stock and simmer for 25 minutes further.

8.) Season with salt and pepper and serve.